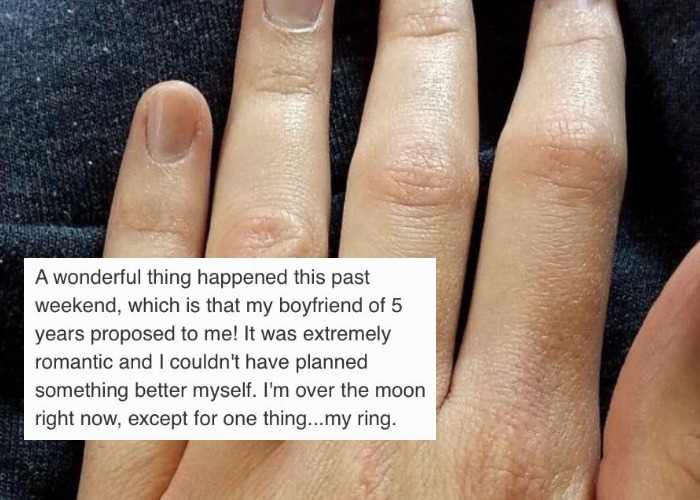 When I heard about this story, my first reaction was to lambast this woman into next week. The idea that someone could be so materialistic that they’d complaining about the ugly engagement ring given to them by their now fiancé made me bristle down to my marrow. Then…then I saw the sucker. Let me tell you, I’ve not turned tail and felt so bad for someone so quickly before in my life. The whole thing started when a Reddit user posted a question in r/relationships asking how to approach her fiancé about not liking the ring he picked out, and ending with the question of, “Should I live with my ugly engagement ring, or let it go?” Not in those words, of course, but close enough.

Should This Woman Live With Her Ugly Engagement Ring, Or Let It Go?

She’s since deleted the post, but thankfully Twitter user @chaeronaea saved it in all its horror for the rest of us to see. And trust me – it’s bad. The ring, that is… Not the relationship. In fact, the Reddit user who posted it seems very much in love with her fiancé, and couldn’t have been more thoughtful or polite in her critique. Take a look! 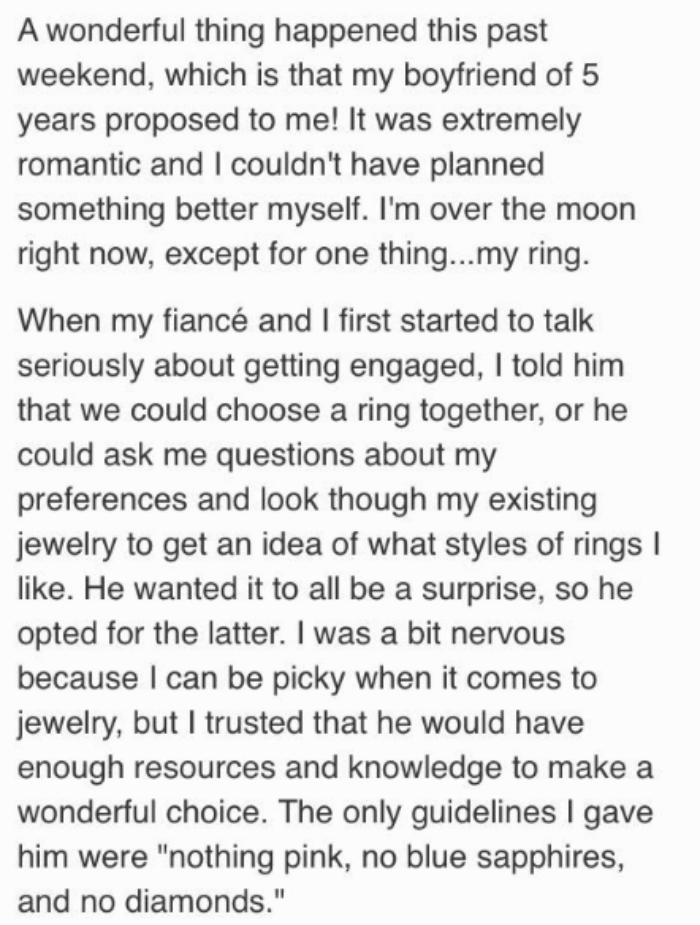 So there were parameters. She sounds like she’s maybe a little particular about what she likes and doesn’t like, but she still left the choice up to him. If he’d just used a little common sense, or even done some research, it sounds like she’d have been happy with just about anything. Which is exactly what she says: 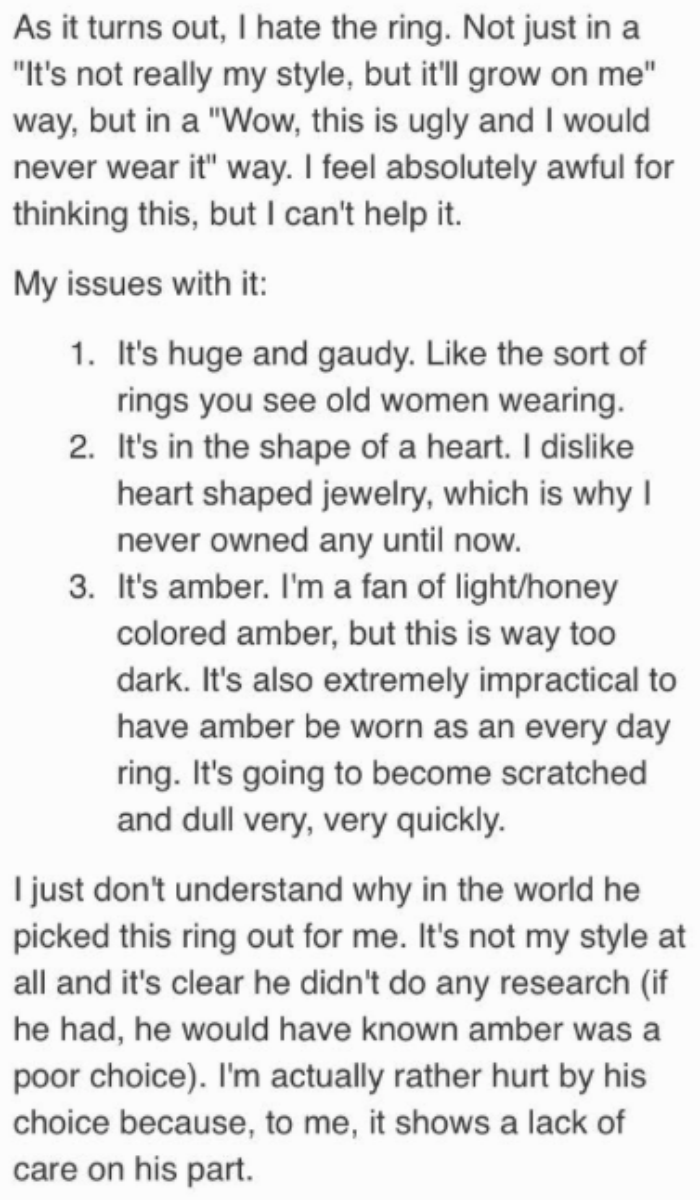 Instead, she ended up with this monstrosity: 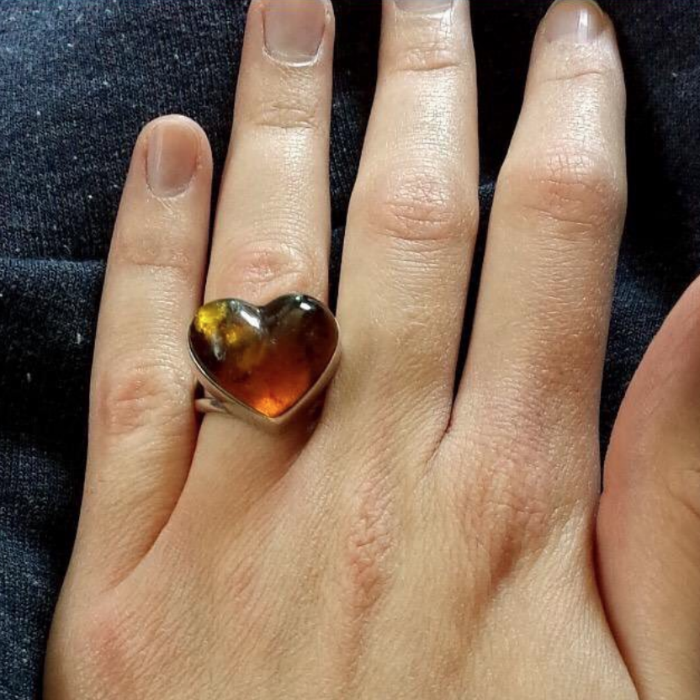 Remember: this is an engagement ring. This isn’t just a gift, this is THE gift, and one she’s expected to wear daily for the rest of her life. She finished her post by saying this: 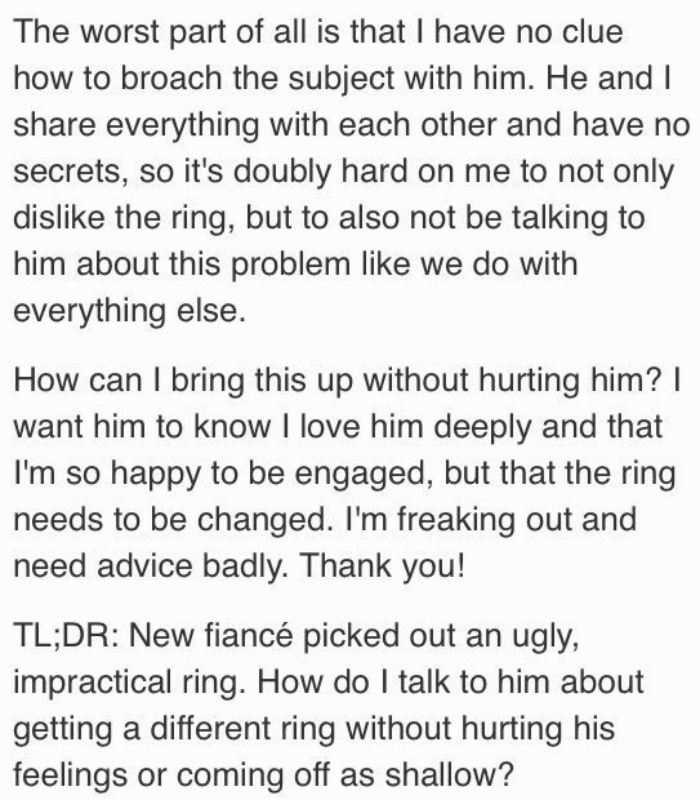 Truly, I try really Really hard not to be judgmental or materialistic, but I’m with her – that ring is the stuff of nightmares. Here’s the original tweet from @chaeronaea:

she deleted but i had it saved. god bless pic.twitter.com/1rOJvzzOEu

I think I got that same ring out of a gumball machine when I was, like, 8

my favorite thing about this is that the ring is exactly as she describes it but you still get just, gobsmacked when you see it

Was he intending they build a dinosaur themed amusement park together? (Seriously though – perfect description, still a shock).

When you finally see the ring🤦 pic.twitter.com/vlkDq3Kzex

r/relationships on Reddit is a hotbed of amazing relationship questions and replies, but if this Reddit user had come to Miss Bossy Pants for advice, it would be this:

Marriage is hard (duh), and though there are a lot of happy, wonderful days, there are a lot of days that really kinda blow. Days where your hubster is going to use all the hot water before you get up for work. Days where neither of you will like each other for reasons that you might not even remember. Marriage is about having to say the hard things in a kind way because ultimately you know the person you’re talking to is the person you vowed to spend the rest of your life with – and even if they don’t love what you’re saying, they’ll know it comes from a place of love.

So while accepting the ring is definitely the easiest way out of a scary situation, it’s definitely not something that will help make your relationship stronger or bring you closer as a couple. For that, you’ll need to fess up. And just remember that what sucks today usually makes for great stories in the future. Trust me, your kids (if you decide to have them) are going to love this story someday.

What do you think? Should this Reddit user live with what looks like old lady costume jewelry adorning her finger for the rest of her life, or should she (politely) speak up and hope her beloved understands?

Got a question you’d like to ask Lil’ Miss Bossy Pants? Send a private message through our Facebook Page and you may be featured! 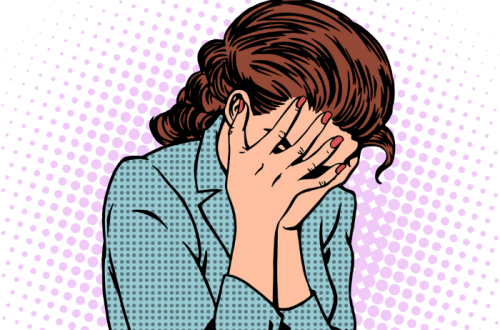 Dear Miss Bossy Pants: My Husband Had An Emotional Affair 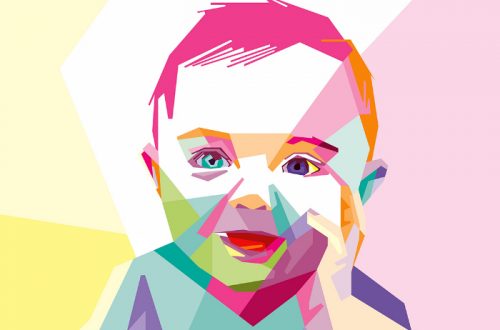 Dear Miss Bossy Pants: My Biological Clock Is Stressing Me Out